Fighting Back Against Parkinson’s 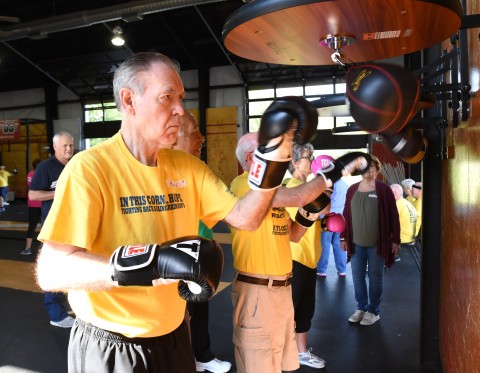 A sweaty gym in central Huntsville may seem an unlikely setting for a miracle, but don’t tell that to Carolyn Rhodes.

“I’ve seen the successes firsthand,” said Rhodes, who coaches Rock Steady Boxing and is married to a man with Parkinson’s disease. “My husband went from falling down several times a month to zero falls for close to a year.”

Parkinson’s disease is caused by a loss of dopamine, a naturally-occurring chemical that helps relay messages from the brain to other parts of the body. As dopamine disappears, so does coordination, strength and balance.

Dopamine replacement therapy is the standard treatment to manage the motor symptoms of Parkinson’s, but for reasons that aren’t fully understood, patients who exercise vigorously tend to need less medicine. And that means fewer side effects.

An Indianapolis lawyer started Rock Steady Boxing in 2006 as a way to fight back against his early-onset Parkinson’s. The nonprofit fitness program now has thousands of loyal followers across the globe.

When Rhodes’ husband, Jim Rhodes, was diagnosed with Parkinson’s early last year, the nearest Rock Steady Boxing class was in Murfreesboro, Tenn. The couple traveled to Indiana to become certified coaches so they could bring the program to Huntsville. 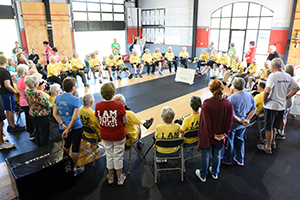 Today, the Huntsville chapter has more than 100 members from all over North Alabama and southern Tennessee. Many of them were referred by Huntsville Hospital neurologist Amit Arora, MD.

“It has been invaluable to almost every patient we have sent for training,” said Dr. Arora. “The disease goes on, but it allows patients to be the best version of themselves. It also gives them a real sense of hope, which is important when you are facing a condition that can seem defeating at times.”

Rock Steady Boxing is a service of the Huntsville-Madison County Senior Center but is open to Parkinson’s patients of all ages. The workouts mimic the hardcore cardiovascular training done by professional boxers, with one big exception: No contact allowed.

Participants pull on boxing gloves and rotate through different exercise stations, pausing only briefly in between. They throw jabs at punching bags, rhythmically swat the speed bag, dribble basketballs, and lift heavy ropes. Boxers with balance problems have a helper at their side to keep them steady.

By the end of the 90-minute class, Bill Haycock is slick with sweat and out of breath.

A retired Army infantry officer from Hampton Cove, Haycock said the tremors in his left hand caused by Parkinson’s disease have all but disappeared since he started Rock Steady Boxing.

“After I was diagnosed, my neurologist said, ‘Get your butt over there,’” he said. “The boxing and the exercise is important, but so is the camaraderie. We’re all in the same boat, and you see people all the time hugging and encouraging each other. I just love being here.”

Since its founding in 1996, Huntsville Hospital’s Jean Wessel Templeton Community Health Initiative has distributed more than $9.8 million to nonprofit organizations working to improve the health of Madison County residents. Beth Richardson serves as the chair of the Community Health Initiative. Click to see a list of the 2017-2018 grant recipients.

Huntsville Hospital has not set their biography yet