By adding 10 new patient beds, the NICU can now care for 55 sick and premature infants at a time. The previous capacity was 45 patients.

“We know the growth of Huntsville and the surrounding areas is going to accelerate with Mazda-Toyota and the FBI adding thousands of jobs,” said Elizabeth Sanders, Vice President of Women and Children’s Services at Huntsville Hospital for Women & Children. “As a hospital, we want to be proactive and have the pieces in place to care for a larger population. The expanded Neonatal ICU will benefit current residents as well as new families that will be moving to our area in the future.”

As the only Level III NICU in North Alabama, the unit is designated by the state as the only Region I Referral Center for babies who need critical, lifesaving medical care. Each year, the NICU admits about 1,000 newborns with a wide range of health problems.

This is the first major addition to the NICU since the unit moved to its current location about 15 years ago.

Significant funding for the expansion was provided by Huntsville Hospital Foundation donors through its Melissa George Neonatal Memorial Fund. The Foundation’s 2019 Miracle Bash and Swim for Melissa events raised a record $220,000 in net proceeds for the NICU project. 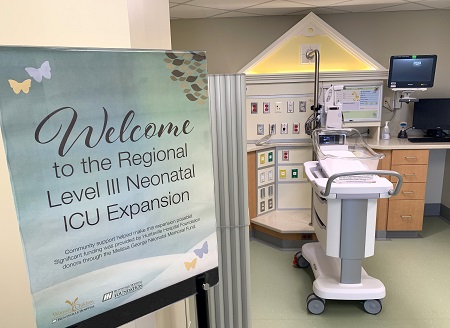