When it comes to a stroke, speed saves 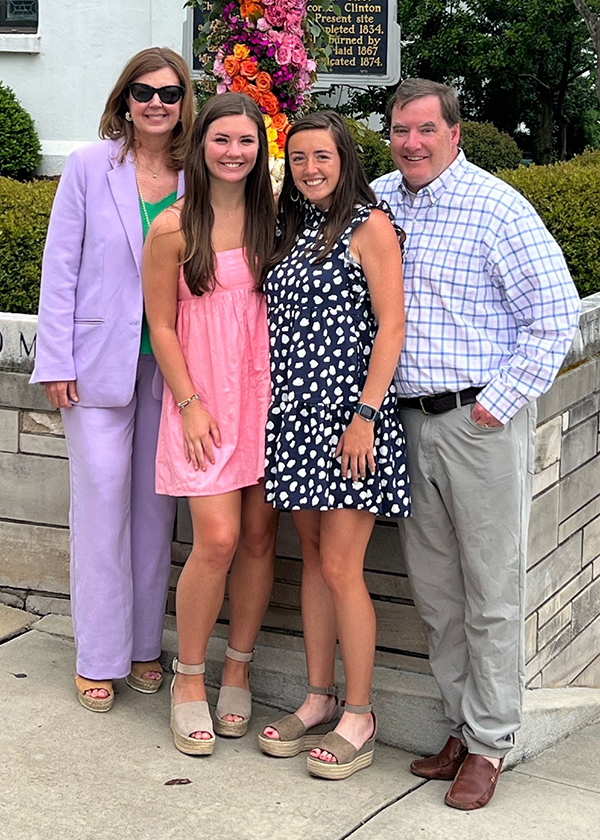 During a stroke, rapid access to medical treatment is often the difference between full recovery and permanent disability. We’ve all been focused on the pandemic for more than two years, but strokes still happen. Back in 2020, Tracy Flesch had a stroke while eating dinner at a local Mexican restaurant and was rushed to Huntsville Hospital where he received fast, skilled care from a small army of hospital heroes including Dr. Mathias Wallace Allen from the Emergency Department, interventional radiologist Dr. Dana Tomalty and members of our interdisciplinary Stroke Team. Here’s Mr. Flesch’s story in his own words.

Objects in mirrors are closer than they appear. We’re all familiar with the statement on our vehicle mirror.

The rear view mirror of my life has a similar statement, but mine says, “Images in the mirror are much scarier than they look.”

It all started as a typical Saturday night – dinner with friends at a favorite Mexican place. It was just a typical night with a frozen margarita and dinner, like dozens of other nights over the years. A normal night.

Dinner arrived; I picked up the fork in my left hand and dropped it. Picked it up again and dropped it, this time it fell under the table. A little out of reach, I strained and picked it up again and dropped it again. Thinking, “That’s weird,” I grabbed it again and sat up. Not realizing anything was wrong, other than the look on the faces of my wife and friends. It was then I knew something was up — but still had no idea it was a big deal. I remember thinking, “Man, that margarita must be really strong.”

My speech was slurred and I had to concentrate really hard to speak. In my mind I thought, “I’m in trouble, my wife is going to think I’m drunk— even though I’d just had a couple sips of my drink.”

At the time, I just wanted to get up and walk it off. While my friends called 911 and my wife called my doctor, a man grabbed me from behind and told me to relax, an ambulance was on the way.

The ambulance arrived, and I was put on the stretcher and rolled out. The night’s entertainment at the restaurant was a woman singing old country hits. I remember a lot of funny details of the night. The funniest was that lady never stopped singing. The show must go on!

“What’s the date? Who’s the president?” the paramedics asked me over and over. “January 25th ... Donald Trump — but that may change,“ I said. The impeachment proceedings had just begun.

I argued with the EMTs the whole way. “You’re having a stroke, this is serious,” they said. “Nope... Just a strong margarita, that’s all.” Again, no fear. No pain. Can’t be a stroke. The woman EMT kept saying, “You’re having a stroke.” Can’t be, I’m awake and aware. I remember saying, “Thanks but you are wrong.” She said, “Then lift your left leg.”

It wasn’t until then I really realized I had a problem. I focused all my effort on my left leg, and I couldn’t get it to lift up. It was about that time I got to Huntsville Hospital.”

Still no pain, until I heard someone say, “Hold still, we need to put in a catheter.” That was the worst part of the night — by far. I was still awake and communicating. This is where my great story begins. Huntsville is blessed to have a doctor who specializes in the procedure to remove a blockage like mine. Within 20 minutes of experiencing my stroke, I was back getting the blockage removed.

I’m a lucky one. I know that. Lucky to have benefited from the right doctor being in the right place at the right time. I’ve witnessed the results of patients who suffered a stroke just like me, but weren’t blessed to have the same circumstance. A stroke can leave a terrible mark on its victim. Thankfully, I was spared from most. I still have a “wonky” left hand that makes my typing a mess. But that’s really the only remaining side effect. I’ve also lost a lot of the inflection in my voice, and I’ll slur my speech when I get tired.

The old saying “speed kills” is true when it comes to traffic accidents. But when you’re talking about a stroke, “speed saves.” Getting to the hospital — or going to the wrong hospital – can mean the difference between life and death.

My recovery really is nothing short of a miracle. I spent three days in intensive care and then two more days in a regular room at Huntsville Hospital. I spent the days walking through halls filled with stroke victims. It could have been so much worse: I was surrounded by patients who didn’t have my luck — but most were much older. At just 50 years old, I had age on my side. I got out of the hospital on Thursday, and home never felt so good.

Because my recovery was so complete, I’m certain most people never realized how serious my stroke was. Even today people are surprised to hear I’m a stroke survivor. That’s a huge testament to the quality of treatment I received.

Today, it hits me often about how things could have turned out much differently. I try not to be dramatic about it, but I drive by a cemetery every day. I’m so thankful my wife and daughters didn’t have to plan a funeral that day. Or even more painful to me, I’m thankful I didn’t become a burden to them.

Events in the mirror are much scarier than they appear.

When someone has a heart attack, the pain in the chest is a tell-tale sign. When you’re choking, you know it. When you’re having a stroke, you likely won’t know it. Know the signs – especially if you are high risk. You must act quickly. Speed Saves. Great hospitals and doctors do, too. On Jan. 25, 2020, I was blessed to have both.